On the second day of Russia’s aggressive attack, we actively participated in volunteer activities and implemented several projects. Here is a story about one of them, which won the EFFIE Awards Europe. 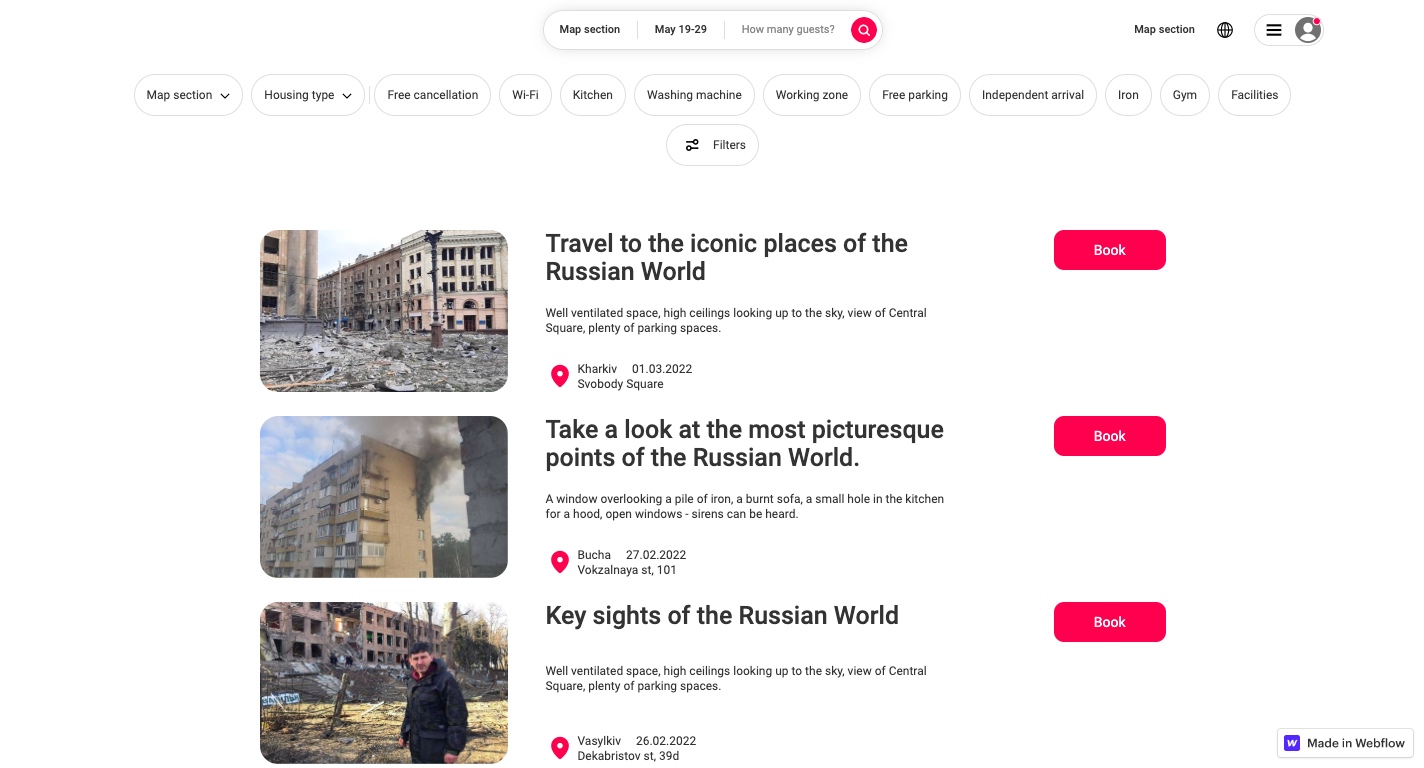 We were all scared and disoriented at the beginning of the full-scale Russian invasion of Ukraine. But it did not last long. On the second day of Russia’s aggressive attack, we actively participated in volunteer activities and implemented several projects to convey the truth about the war.

One of them was the “All around Russian world” project, which we implemented in collaboration with bickerstaff.

At the beginning of the invasion, it was essential to give the invasion maximal publicity, both for the foreign audience and the Russians themselves. At that time, we all believed that if we showed the Russians what was happening in Ukraine and what crimes against humanity the Russian army committed, the Russians would rise against these atrocities and stop their criminal power. Russian propaganda presented the attack on Ukraine as the destruction of military potential when in reality, the Russians were shelling civilian residential buildings, hospitals, children’s institutions, and civilian infrastructure objects, committing genocide.

Therefore, we decided to show what “russian world” really is – a Russian propaganda cliché actively reproduced in Russian mass propaganda as a construct that crosses the borders of countries and legitimizes the russian invasion of the neighboring countries with a Russian-speaking population.

Almost from the first days of the full-scale invasion of Russia, most of the world’s air carriers stopped operating in Russia, so Russians became more limited in their global movements. The only thing that was available to them was “russian world.”

We decided to offer a tour of the actual “sights of the russian world.” For this purpose, we have developed a site similar to popular accommodation search services such as Airbnb. Among the offers on the website, we showed photos of apartments destroyed by Russian troops and rocket attacks. The descriptions of the proposals were also stylized according to the reality of the “russian world.”

In addition to creating a site, our task was also to reach the maximum audience to convey our idea. But if it did not create difficulties for the Western audience, it was much more difficult to convey our message to the Russian audience. Almost from the start of the full-scale invasion, all key advertising platforms (such as Google and Meta) were blocked in Russia. Therefore, we faced the task of finding ways to deliver our communication. Such a solution was placing our advertising on many decentralized teaser and banner networks that provided coverage to the Russian audience. Most of them had operational facilities outside the jurisdiction of the Russian Federation. In this way, the Russians could not physically block all of them. And while each of these networks individually did not have a reach that could be compared to the reach of Google or Meta, due to the number of these networks, we got a reach of over 18 million users.

The banners we used in advertising offered to travel for Russians and talked about the charms of the “russian world.” And after clicking the banner ads, you could look at the sights of the “russian world” – the destroyed houses of civilians, which were by no means a military threat to russia.

After the launch of the project, many well-known international mass media wrote about it, which further strengthened the effectiveness of the campaign.

In autumn 2022, the project was presented at the Effie Awards Europe festival. According to the festival results, the project received a bronze award for its effectiveness in conveying the truth about the Russian invasion.

There is a lot of work ahead. We keep fighting. Stand with Ukraine.

Learn more about our other Media projects.

In the near future we will reply to your email.

I will be wait

Your privacy is very important to us. We want your work on the Internet to be as enjoyable and useful as possible, and you absolutely calmly use the widest range of information, tools and opportunities that the Internet offers.

The personal information of users collected during registration or filling out the application form (or at any other time) is mainly used to prepare the Products or Services in accordance with your needs. Your information will not be transferred or sold to third parties without your consent. We may also partially use personal information in special cases, such as individual advertising messages or email newsletters.

What data is collected on the site

To interact with the company, you send your Name and E-mail through the registration form.

For what purpose is this data collected

The name is used to contact you personally, and your e-mail for communication, sending you letters, news, useful materials, commercial offers.

You can refuse to receive mailing letters and delete your contact details from the database at any time by clicking on the unsubscribe link present in each letter.

How is this data used

Using this data, information is collected on the actions of visitors to the site in order to improve its content, improve the functionality of the site and, as a result, create high-quality content and services for visitors.

You can change your browser settings at any time so that the browser blocks all files or notifies you when these files are sent. Please note that some functions and services may not work properly.

How is this data protected

Our employees are trained to understand and implement these control measures, they are familiarized with our Privacy Notice, rules and regulations.

However, even though we strive to protect your personal information, you must also take measures to protect it.

We strongly recommend that you take all possible precautions while you are online. The services and websites we organize include measures to protect against leakage, unauthorized use and alteration of the information we control. Despite the fact that we are doing everything possible to ensure the integrity and security of our network and systems, we cannot guarantee that our security measures will prevent illegal access to this information by hackers of third-party organizations.

If you change this privacy policy, you can read about these changes on this page or, in special cases, receive a notification by e-mail.

A “cookie” is a piece of information that is stored on your computer’s hard drive and which records how you move your way around a website so that, when you revisit that website, it can present tailored options based on the information stored about your last visit. Cookies can also be used to analyse traffic and for advertising and marketing purposes.

Cookies are used by nearly all websites and do not harm your system.

We use cookies to track your use of our website. This enables us to understand how you use the site and track any patterns with regards how you are using our website. This helps us to develop and improve our website as well as products and / or services in response to what you might need or want.

This website uses cookies to improve your experience while you navigate through the website. Out of these, the cookies that are categorized as necessary are stored on your browser as they are essential for the working of basic functionalities of the website. We also use third-party cookies that help us analyze and understand how you use this website. These cookies will be stored in your browser only with your consent. You also have the option to opt-out of these cookies. But opting out of some of these cookies may affect your browsing experience.
SAVE & ACCEPT